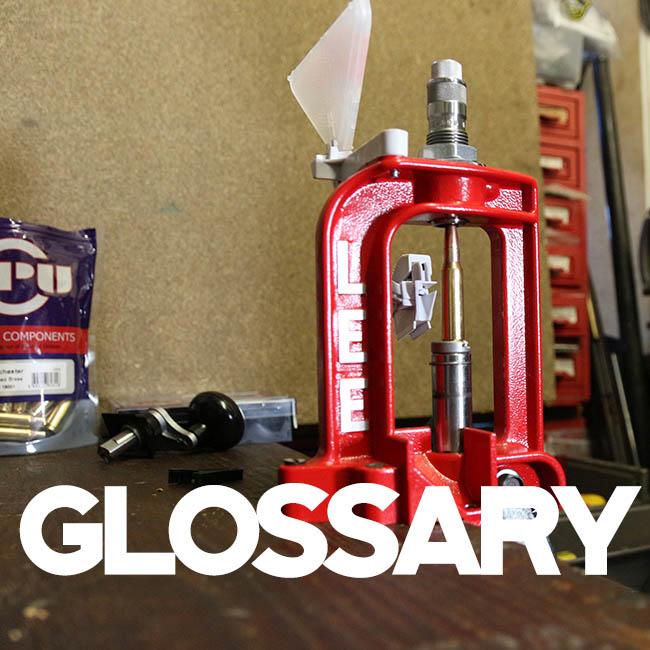 Reloading has it's own language and as a result can be very daunting for complete beginners!

Most reloaders learn on their own using information from books and guidance supplied by manufacturers.

To help the novice reloader and those experienced in reloading ammunition already who may need a refresher, we've created a comprehensive glossary of common words and terms in reloading and what they mean.

We hope it helps! 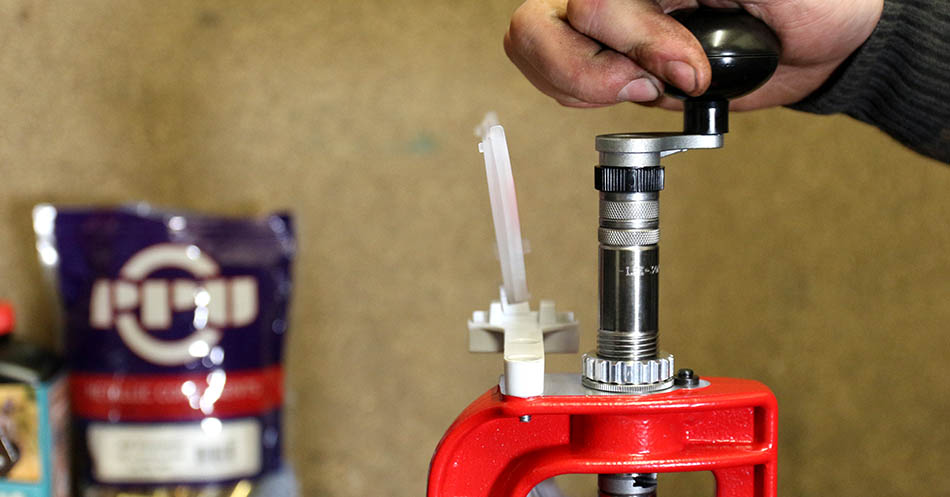 If a brass case has been used a number of times, the neck of the case will work harden and be prone to cracking. Annealing is the process of heating and cooling used to soften the brass, with the aim of extending the useful life of a case.

Sometimes referred to as a bullet head this is the projectile that leaves the muzzle of the gun. early types were made of lead, though a copper jacketed spitzer type bullet is the most common in use today. There is a huge array of bullet types, to see more link to our sierra guide here. Full range of bullets available here.

A process used to form lead bullets, this is a way of pressure forming instead of using a mould, not commonly done at home due to the complexity of the process.

The name given to the type of ammunition a gun will accept. For cartridge guns, each calibre has a name, either expressed in imperial (.308 Winchester), or metric (7.52x51mm). Each calibre is different and cannot be interchanged.

Grooves cut around the circumference of a bullet, these are so a case can be crimped into them, to increase case pressure at ignition, more often used on magnum or high velocity rounds.

This is a full, loaded round of ammunition. Sometimes erroneously referred to as a bullet, this term is incorrect and refers to the projectile only.

Made of brass, the case contains the entirety of the round of ammunition, holding the primer, projectile and powder. Cases are referred to by their calibre, and come in a mind-boggling array of shapes and sizes, the thing most likely to trip up a home loader is primer type. Click here to view our primer sizing chart. Full range of brass cases available here.

Many calibres evolve from the changing of a previous calibre by reducing or expanding neck sizes, case length etc, home loaders and wildcat cartridge manufactures often use this procedure when cases are not readily available. For example, .300 Blackout is based on a .223 Remington case, with the neck expanded to accept a .30 bullet.

A slight back cut to the case mouth to ease bullet seating.

A digital instrument used to measure the velocity of a bullet, useful when tailoring loads or ensuring you are legal to reach local shooting range restrictions or hunting requirements.

The consumables when making ammunition, items which will be expended by the shooter. This includes brass cases, primers, bullets and powder.

The process of squeezing the case mouth to ensure the bullet is securely gripped. This helps build pressure in the case before the projectile is launched, and increases muzzle velocity,

The reloading information available, usually found on the website of the powder manufacturer, best to ignore what is written in forums or by word of mouth. if you value your eyes, fingers or life then stick to the written word! Read our blog about where to find data.

The process to remove a burr, a burr being the small amount of material left over in the trimming process that sometimes sticks to the case mouth.

To remove the primer from a fired brass case. This is generally the first step in reloading. Decapping Die available here.

The narrow pin inserted into the case mouth that forcefully removes the primer from inside. Easily broken when trying to remove stuck primers or if unwittingly used on a Berdan primed case.

Also known as expanding die, this slightly flares the neck of the case to better receive the bullet.

Sizing a brass case to fit a given breech by firing a bullet or blank charge, the charge expands the brass case to the size of the breech. Fire formed brass will generally only feed to the gun in which the brass was formed in.

The hole at the base of the case that the primer ignites the powder through.

A hard copper dish or disk that is added to the base of a lead cast or swaged bullet, this is to reduce damage or deformation in high velocity loads. Range of gas checks available here.

Colloquial term for a poor ignition, this term refers to when there is a perceptible delay between pulling the trigger and the gun going off. There are many reasons why this may occur.

The (usually copper) metal coating surrounding the lead core of a bullet.

As a home loader military rounds could seem like a cheap way of acquiring brass, however there are pitfalls. Some older ammunition uses Berdan primers which are nearly impossible to remove the primer and then re prime, in part due to the dual flash hole design of the case. Cases can also be crimped around the primer, needing a further operation to remove. Military nomenclature may also confuse some shooters, for example 5.56x45mm NATO is similar, but not identical to .223 Remington.

Some lead bullets are available with powder coating, this is to help reduce leading to the barrel, often available in many different colours.

The E.U banned a number of popular powders due to health and safety issues during the manufacturing process, there is a lot to cover so there is a separate blog available, click here.

A complete failure of ignition. This could be due to many reasons, from poor home loading to poor gun maintenance.

Usually the narrowest part of the case, or the bit where the bullet seats.

Also called a collet die, this re sizes the neck of the case only where the bullet seats. Most people in the UK have one gun in each calibre and once the brass has fire formed there is no need to size the body of the case back down to factory tolerances. This usually extends the life of the case by a few loads.

A small cup containing an amount of primary explosive and an anvil, pushed into the bottom of a case. This is the part which detonates upon impact from the firing pin. Full range of primers available here.

The removal of the crimped primer pocket found in some military cases or from damage when seating a primer incorrectly.

Putting in or seating a new primer in a case.

A straightforward tool designed to reload ammunition, has exchangeable dies and most are fitted with priming options too. To view our full range of presses click here.

A multi operation press that will, on four pulls of the handle produce a complete round ready to fire, these can be more difficult to use than a single stage press and not advised to be your first foray into reloading. For information on the NEW APP press from Lee read the blog here.

The central steel rod in the middle of the press.

To size a case back to factory specifications. 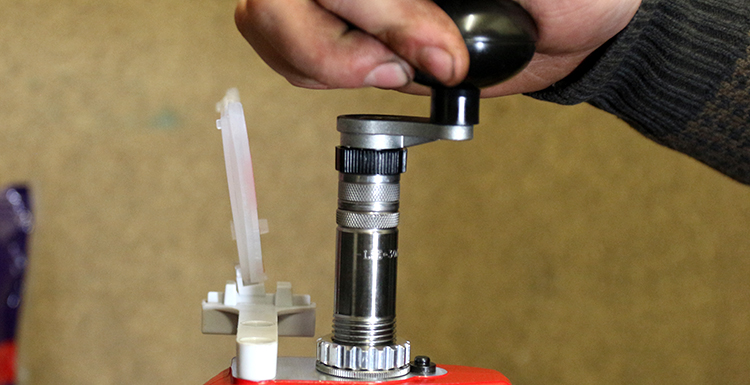 A term for one complete cartridge, this refers to the complete round of ammunition ready to load and shoot.

The die that pushes the bullet into the case at the desired depth, adjustable for bullet type/ length.

The depth to which a bullet is seated in the brass case.

The part that holds the brass case in the press or priming tool, these are calibre specific, however some calibres use a parent case so some are interchangeable and will do a few different calibres. Shell holders available here.

This sizes the case to factory tolerances. There are also bullet sizing dies that will size a lead cast bullet to the correct size.

A primer that has ignited the cartridge, this is now removed for reloading.