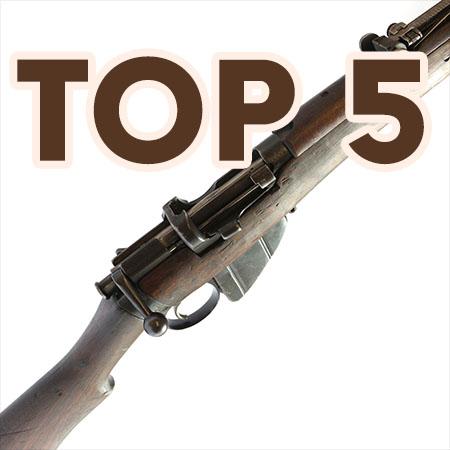 Military rifles have exploded in popularity in the last few years. They used to be commonplace and cheap, to the point where they were sporterised into hunting rifles and similar. These days however, they are thin on the ground, and previously commonplace rifles are becoming increasingly hard to find. We can also deactivate any rifle to order, so if you would like to own one, but don't have a firearms certificate, please let us know.

We always try and keep a healthy supply of military rifles in stock, from the very earliest antique black powder bolt action rifles up to more modern WWI and WWII era rifles. Here are our Top 5 Bolt Action Military Rifles.

The Lee Enfield is an iconic rifle. The No.4 was the last model to see widespread adoption and went through numerous minor changes to the official pattern throughout the Second World War and beyond. The cock on close system invented by J P Lee, and the large magazine capacity is responsible for staggering rates of fire achievable by skilled and practised shooters, and the 'mad minute', has cemented the Lee Enfield's place in British firearms history.

The No.4 MKI* is a mid-war production gun, and as such, has been slightly simplified from its pre-war pattern. Stamped and parkerised parts are not uncommon, making the rifle marginally lighter and more weather resistant. The bolt release is now a simple notch the bolt head lifts out from, instead of the previous catch that could become clogged with detritus and hard to operate. The sights have been simplified, it was found the fine Vernier adjustment of the MKI rear sight too costly to make for the benefit, as engagement most commonly took place at 300 yards or less, so a simple 2 position sight was added to the MKI*. These sights are simple and effective, offering a peep sight arrangement uncommon on many military rifles of the era.

The rifling was also altered to speed up production, most MKI* rifles are cut with 2 rifling grooves, rather than five. This does not affect the quality of the shooting but was simply faster to produce in war torn Britain and Canada.

The Lee Enfield No.4 MKI* is simple and uncompromising. With 10 rounds available fed from stripper clips, and easy to use sights, the No.4 MKI* is an excellent full power military rifle. Perhaps not as inherently accurate as the Mauser, but nevertheless an excellent and fun to use shooting rifle.

The Swedish model 1896 is a fantastic and often overlooked military rifle. Manufactured by the Carl Gustav works, and Mauser, the Swedish Model M96 is possibly the greatest pre-98 Mauser available. Initially made under contract in Germany, it is a cock on close gun, but uses front mounted locking lugs, so it is both swift to operate, strong and accurate. In the late 1890s, Mauser made guns under contract for a multitude of countries, but what sets the Swedish Mauser apart is the cartridge. The 6.5x55mm cartridge is widely acknowledged as one of the best military cartridges ever made. It is was a small bullet for the time, only .256'', when most nations were using larger .308'' or .311'' bullets. This gives is exceptional ballistic performance out to 1000 yards and has been used by target shooters and Olympians up to the modern day.

Given the Swedish Mauser's exceptional build quality and ballistic performance, it is hotly demanded by hunters and target shooters alike, and you would be hard pushed to find an ex issue military rifle capable of the same shooting performance.

The previous iteration of the No.4 in the Lee Enfield family, and possibly the most recognisable. The SMLE was born out of the earlier Long Lee Enfield rifles, used during the Boer War. The Long Lee was found to be an excellent rifle, and lessons learned in the bush against the Boer's superior marksmanship helped shape the next generation of Lee Enfield rifles. The British military was among the first to recognise that a shorter, handier rifle was just as effective and easier to handle than a full-length rifle like the 'Long' Lee Enfield, and the SMLE was adopted in 1907. The 'short' in the name refers to the length of the rifle, only 45'' long, compared to the Long Lee's 50". This combined with the peculiar muzzle arrangement, with the muzzle cap and bayonet lug being nearly flush with the barrel, gave the SMLE a unique and instantly recognisable look.

Having a 10 round magazine and cock on close action, the SMLE was capable of withering rapid fire, and a well trained soldier was consistently able to hit a target at 300 yards with 15 rounds in one minute, leading to the possibly apocryphal story that the German forces, at the first battle of Ypres thought they were facing a battalion armed with machine guns, due to the speed and accuracy of the British fire. The 10 round magazine offered a significant advantage over the 5 round Mauser 1898, and the awkward French Berthier and Lebel rifles, and is a hallmark of the Lee Enfield series of rifles.

The MKIII* is the apex of this development. Wartime shortages in 1915 led to a slight modification of the SMLE MKIII design, eliminating the seldom used volley sights, out of date magazine cut off, and simplifying the cocking indicator. This is the rifle that saw service throughout the remainder of the First World War and well into the Second, and across the breadth of the colonies. The sights are slightly harder to use than the No.4, being an adjustable notch and post arrangement in front of the receiver, though arguably still better than the peculiar Langevizier sight of the contemporaneous Gewehr 1898. Despite this, the SMLE is still an excellent and time proven military rifle, and no list of the best military bolt action rifles would be complete without it.

Another full-length military rifle, this time from Switzerland, the Swiss Schmidt Rubin 1911 follows the common theme of having evolved from an earlier rifle. The original model 1889 was chambered for the similar 7.5x53mm cartridge, and was similar to other bolt action rifles of the day. What makes the Schmidt Rubin series notable is the straight pull bolt design and exceptional build quality. The straight pull design allows extremely rapid fire, arguably even faster in trained hands than a Lee Enfield.

The 1911 was the second major generation of Schmidt Rubin rifles, being the first to accept the Swiss GP-11 ammunition. It seems a tawdry comparison to say the Schmidt Rubin is built like a Swiss watch, but it is at least accurate. The 1911 is a fairly complicated gun, with a long bolt and camming locking lugs. The 1911 is made exceptionally well, with each part stamped with an acceptance mark. 1911 rifles, or Schmidt Rubins in general are commonly found with all matching numbered parts. What makes the 1911 particularly unique to shooters with a historical interest is that these rifles were issued to the civilian populace, as Switzerland generally did not have a standing army at the time. It is therefore not uncommon for a small ticket with the original holder's details to be found under the butt plate, provenance unheard of with other military rifles.

Given Switzerland's traditional neutrality, these fine rifles never saw active service. They are therefore in generally exceptional condition, at least mechanically. Care and attention was given by those who kept the guns, and they did not suffer the rigours of battlefield duty. This, combined with their exceptional build quality makes the 1911 one of the most reliable and functional military bolt action rifles available. The only common flaw with Schmidt Rubin rifles is that they were used in the field in Switzerland's breath taking but snowy scenery, and as such, the wood may have suffered a little use.

The 1911 is an excellent shooting rifle. A full-length rifle, with excellent, easy to use sights and a good cartridge, what the 1911 lacks in 'military history', it more than makes up for as an excellently designed and constructed target rifle.

The Mauser action 1898 is one of the best, if not the best, bolt action rifle design ever created. The cock on open action and strong three lug design is ubiquitous in sporting rifles and precision military bolt rifles the world over. It may seem unusual, therefore, that the rifle appearing in this list is a Yugoslavian copy of the Mauser action, rather than a Mauser itself. The Balkan state of Serbia has a strong tradition of arms manufacturing, with factories such as Zastava producing quality sporting rifles to this day. The first Mauser adopted and modified by the Serbs was the M71 rifle, upgraded with progressive twist rifling and using a smaller calibre than the 11.15mm original. These rifles were better than the original Mauser design, and this tradition of modifying and improving Mauser designs continued until after the second world war.

The latest iteration of Yugoslavian Mauser is the M48 rifle, a modification of the German WWII k98k. Similar in appearance, though the Yugoslavians machined the receivers out of solid steel, rather than castings, and ensured a better metal to metal fit in receiver parts. An upper rear hand guard was also added, and the stocks made from good quality walnut, compared to the beech stocks more common on German rifles. The M48 remained in front line service with the Yugoslavian armed forces until the late 1950s, when the bolt action rifle was retired in favour of self-loading AK pattern guns.

Yugoslavian Mausers are brilliant military bolt action rifles to own and shoot. They are usually found with light wear, as the Yugoslavian forces were meticulous with their care and storage. Their most notable use was during the Yugoslav wars of the 1990s, though it is unlikely you will come across one that has seen service, as most on the market were sold off surplus military inventories.

Unlike German Mausers, of which much has already been written, and much more yet spurious rifles exist on the market, the Yugoslavian Mauser has the distinct luxury of being a very well made, and seldom used rifle, without the macabre desirability that German Mausers attract. You can therefore own one of the best bolt action rifles ever made, that will shoot excellently and stand the test of time, for a very reasonable price.

All these rifles are available to order, with a valid firearm licence and variation, or they can be deactivated as requested. They can either be bought in the shop. Please call 0113 256 9163 or email sales@henrykrank.com with your requirements.