The Uberti Reproduction Colt Model Of 1860 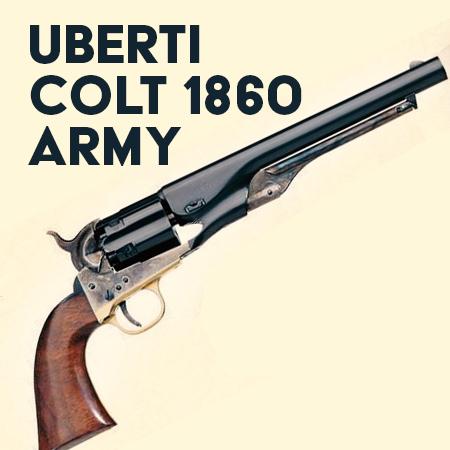 The Uberti Reproduction Colt's Model Of 1860 Colt's pistols are splattered across the pages of American history. From the immense Walker to the iconic 1911, the Colt pistol is as synonymous with the West as Chevrolet and apple pie. It was during the American Civil War, however, that Colt firmly established itself through lucrative contracts on both sides of the Mason-Dixon line. The cap and ball model of 1860 was one of Colt's most popular models, with around 200,000 being produced between 1860 and 1873, and the Uberti copy on test today is faithful in every way to the original.

Specifications of the Uberti reproduction Colt 1860

Weighing in at around 2.6lbs unloaded, the revolver is neither onerous to shoot nor handle. The walnut grip has a pleasing swell and fits the palm well, and the index finger falls naturally on the trigger. I can imagine those with larger hands than myself may find the reach to the trigger rather cramped, but I feel this is not really a problem with this model specifically.

The 8 barrel leaves the gun somewhat muzzle heavy, though I might argue this is somewhat of a benefit, as the sights might lead one to shoot rather high otherwise. The open frame design has been a source of controversy pretty much since Remington released their New Army model of 1858, and the Remington is arguably stronger, though with modern materials and production quality, this is an issue from a by-gone time. The Uberti 1860's central arbor is pinned immovably into the frame, and the wedge holds the barrel to the arbor and frame tightly and strongly.

On this particular gun on test today, a .0025 feeler gauge will not pass in the gap between the cylinder and barrel, and it's clear the pistol is made to tight tolerances and the highest precision. Whilst nominally a .44, the pistol is closer to a .45, and this particular gun seems content with .451 balls. As is the norm with cap and ball revolvers, a slightly over size ball must be squeezed into the cylinder to provide a good gas seal and prevent chainfire.

This cylinder on this gun measures around .448, so a .0015 gap will accept a .451 ball satisfactorily, with a perfect circle of lead shaved off by the cylinder. The 'creeping' loading lever is a vast improvement over the simple pivoting lever of the 1851 and Remington 1858, and significantly improves leverage and ease of loading over these earlier models.

As mentioned, the sights on the 1860, and all Colt's early single action revolvers, are not up to a modern standard of shooting. The front sight is a fixed blade around a quarter of an inch from the muzzle, and the only way to adjust for elevation is by literally filing the front sight down, which I am not terribly enthusiastic about. The rear sight is a simple V cut into the top of the hammer, which broadly lines up with the front post. It is worth bearing in mind that these pistols were designed to hit a man-sized object at 50 yards, and are consequently not precision target guns.

The sights are sufficient for the job, and anything drastically more precise would be wasted in any case. I was surprised by how excellent the trigger is on the gun, the trigger blade itself is thin, and breaks crisply at around 2lbs. This makes an immeasurable difference when trying to shoot accurately, as I found I could concentrate more on using the rather difficult sights, knowing the trigger would go off reliably with very little effort.

The fit and finish, as might be expected of Uberti, is excellent. As with the original production Colts, the grips are fitted to each individual gun, and therefore sit seamlessly with the backstrap and trigger guard. This does however mean that the grips are not generally interchangeable, and some fitting would be required were they to be changed.

The frame, hammer and loading lever are case hardened, and this contrasts nicely with the blued barrel and cylinder, and brass trigger guard. This model is the '4 screw' version, with an additional screw in either side, to accept a shoulder stock. Unfortunately, I do not currently have a shoulder stock with which to test, so these screws are somewhat superfluous, though it is a nice addition should I ever come across a stock.

The Uberti 1860 is as accurate as any muzzle loading revolver I have shot, and I feel the lightness of the trigger puts this ahead of comparable revolvers. At first, it took a little time to figure out where the gun was shooting at 50 yards, a little high and right, though this was perhaps me compensating needlessly for the long barrel. After this, the gun hit a muzzle loading target consistently.

Whilst I was not able to group exceptionally, all 12 shots made it onto the paper. Surprisingly, I preferred shooting one handed, I found the sights easier to use with my arm outstretched. With a recommended load from Uberti (I am not a fan of cornmeal filler, it just makes a mess), a lubed wad and a small sliver of lard after the bullet, the gun shot well and I had no problems.

A common problem with open top Colts is the tendency for shards of the spent percussion cap to fall back behind the hammer and jam the action. The RWS 1075 caps I was using detonated fairly consistently, and I only had a couple of pieces attempt to fall into the action, though these were swiftly cleared and I shot without a jam.

This leads nicely into cleaning the revolver, which also gave me an excuse to disassemble the gun and examine the innards. Some sources will claim that black powder fouling is hard to shift, and a plethora of weird and wonderful chemicals are required to bring the gun back to order. On the contrary, as the residue left by black powder combustion is soluble, the only substance required to clean the revolver, is water.

Disassembling the gun is necessary, the cylinder and barrel are first to be cleaned, as these accumulate the most fouling. Boiling water and a good scrub with a bore brush is sufficient to clean both. It is important to clean with boiling water, as the metal will retain the heat and the water will largely evaporate on the scalding metal. A good oil after is advised to keep the gun in perfect condition.

The frame will also have a sheen of fouling, though this can be removed by wiping with a damp cloth, then oiling. Fouling does accumulate inside the action, so the intrepid shooter ought take the gun apart fully and clean each part thoroughly. Colt single actions are simple, and a full strip and clean takes no more than around 10 minutes. Used and maintained properly, I've no doubt this gun will outlast me.

All in all, the Uberti Colt 1860 is a well built and eminently shootable gun. The fit and finish is good, there is no sloppiness in the cylinder or barrel arbor, and it feels and handles like the solidly built gun it is. Loading every six shots can get arduous, but this is the nature of the beast with muzzle loading revolvers.

The sights are imperfect and hard to use, but they are sufficient to shoot consistently when required. Uberti have faithfully reproduced one of Colt's most famous pistols, and the gun is built to such quality that it would be equally at home in either the re-enactor's, or shooter's hand.

If you have any questions about anything to do with the reproduction Uberti Colt 1860 or any of the other reproductions stocked by Henry Krank, please do not hesitate to get in touch.