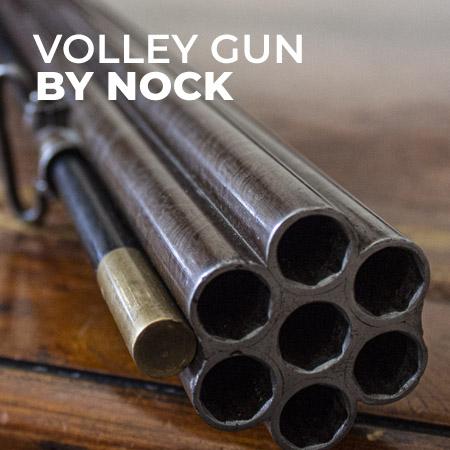 The seven barrelled Volley Gun, as made by Nock, is one of the most ferocious and recognisable guns from the Age of Sail. First invented by James Wilson in 1779, the volley gun saw service with the Royal Navy, and found some popularity with civilian goose hunters.

Henry Nock is one of the best known English gunmakers, ranking alongside Purdey, Mortimer and Egg as some of the finest names of the late 18th/early 19th centuries. Nock lived until 1804, and by his death had a number of patents to his name and rated amongst one of the most successful firearms designers and builders of the era. His company later became the property of James Wilkinson, and eventually became the Wilkinson Sword Company, still producing consumer razors and similar today.

Nock's name is today most famously associated with the Nock Volley Gun, designed by James Wilson in 1779, for which Nock was contracted to produce for the Royal Navy. Nock's Navy contract paid him £13 per gun, the equivalent of nearly £2000 today, a substantial fee. The stubby seven barrel cluster of the volley gun makes it instantly recognisable, and it is a testament to the ingenuity of gunmaking of the period. Throughout the muzzle loading era, gunmakers continually tried to innovate and overcome the limitation of reloading after each shot, with varying degrees of success, either commercial or otherwise. Nock's volley gun was no exception to this rule, and the seven instantaneously discharging barrels were found to be too cumbersome and even dangerous to use.

Due to having seven barrels, rifled initially, fast reloading was simply not an option, and it is likely the gun was either discarded immediately after use, or used as a small calibre single shot rifle, being loaded down the central barrel only. Much has been written about the gun's immense recoil and ability to break the shoulders of those shooting it. Early models of Volley gun, and rifles for the civilian market are of a fairly small bore, around .40 or 60 bore, so 7 barrels loaded with the service charge of allegedly around 90 grains leads to stout recoil. Later Naval models were of a slightly larger calibre (.60), and smoothbore, though civilian purchase guns continued to be rifled.

The gun's first major engagement was at the Battle of Gibraltar in 1782, where around 20 volley guns were allocated to each ship of the line in the engagement. The gun was ordered by the Navy for use in the fighting tops of ships, where a sailor or marine would fire down from the upper rigging on to an enemy vessel's quarterdeck. This tactic could lead to fires starting from burning wads falling to the deck, a significant hazard in wooden sailing ships, and was banned by Nelson prior to Trafalgar, possibly to his mortal detriment, as Nelson was shot by a French marksman, most likely firing from the rigging of the Redoubtable.

In reality, therefore it's much more likely that the reputation the volley gun has for recoil is more down to the way it was used, than the actual charge. When fired from the shoulder standing at a level target, the volley gun has a significant, but not unmanageable recoil. Due to the imprecise nature of detonation, not every barrel detonates at exactly the same moment, which increases felt recoil time, but not necessarily force. When used aloft on a ship however, with the butt of the gun elevated high in the shoulder in order to fire at a target at an extreme downward angle, and possibly used by a stressed or poorly trained sailor, it is easy to see how this gun can lead to injury when not used with great care.

Ultimately, the Nock Volley Gun went the same way as many other attempts to increase the firepower of muzzle loading guns, and was retired from service some time prior to Trafalgar, after a short and unremarkable career in Naval service. Volley guns experienced a small vogue with goose hunters, though this likewise fell out of favour, most likely as the gun was too cumbersome to reload in the field, and ineffective when compared to larger bore shotguns. The concept of the volley gun was not unique to Nock, multi barrelled simultaneous discharge guns are an old and enduring concept, and still exists today, with bizarre weapons systems such as the Metal Storm 36 barrel gun being at its heart, the same concept as Nock's, 200 years before.

To view our range of Nock Volley Guns currently for sale, click here.

How To Sell Your Antique Gun