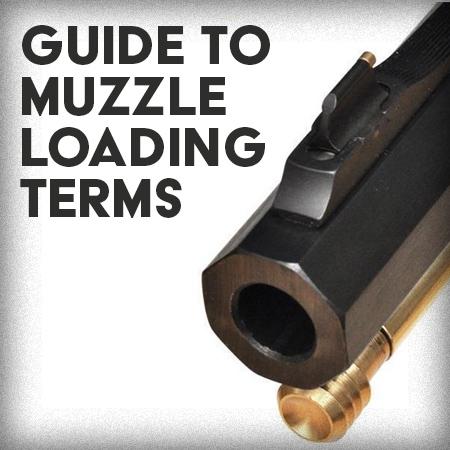 Whether you are a hunting enthusiast, a target shooter or simply looking for a display item, muzzleloaders are a popular choice. The Muzzle Loading flintlock and percussion rifles synonymous with black powder.

Whether you are an accomplished muzzleloader enthusiast or just starting out, there may be terminology you are unfamiliar with. Henry Krank have compiled a glossary of Muzzle Loading terms that introduces you to the words and phrases most commonly used when talking about muzzleloaders.

Ball Screw - Resembling a wood screw, this attachment threads into the end of the ramrod and is used for removing the ball from the bore. The threaded point of the ball screw digs into the soft lead of the ball and grips it firmly enough so that it can be pulled through the length of the barrel. Another method of removing stuck balls is with the fast bullet puller, click here to read our blog about it.

Black Powder - A mixture of potassium nitrate, charcoal, and sulphur. Combined, these ingredients form the standard propellant for Muzzle Loading guns. We have a few types available, click here to read about the different types.

Bore Build-up - The residue, or black powder fouling in the barrel after shooting.

Breech - The enclosed end of the barrel on a muzzle loading gun. This is where the gun is detonated.

Breech Plug - The threaded plug that is screwed into the breech end of a muzzleloader's barrel. This forms a gas-tight seal and is actually the rear or bottom of the chamber.

Cap box - Normally appears as a hinged compartment on the buttstock of a rifle or shotgun. The cap box is exactly as the name suggests, a place to carry caps. May also be known as a patch box on flintlock guns.

Caplock - A term often used to describe a percussion lock.

Capper a tool used to hold percussion caps and make the capping of a percussion guns easier, there are a few different types, click here to view our helpful guide.

Charge- the powder that provides the energy of the shot.

Charger - A term used to describe anything flask, horn, dipper, etc. that measures out one exact charge of powder. Click here for a measuring guide for powder handling.

Damascus Barrels - Early barrels formed by hammer forging together strips of various steels. This was primarily a way of adding strength but has a secondary quality that is a beautiful pattern.

Flintlock- describes the action or source of ignition, a flint hits the frizzen creating sparks by friction, this hopefully ignited the powder in the flash pan, which flashes across the flash hole, igniting the charge.

Flash - The result of the ignition of the priming powder in the flash pan when a flintlock is fired.

Flashhole - The hole leading from the pan of a flintlock, or the nipple of a percussion gun to the powder charge in the chamber.

Flash Pan - Small pan that holds the priming charge and is located below the frizzen or striking arm on a flintlock.

Frizzen - The hardened steel surface that the flint strikes to ignite the primed flash pan of a flintlock.

Fulminate of Mercury  A primary explosive, formerly the active component in percussion caps, though now replaced by less toxic compounds.

Hangfire - A dangerous situation that occurs when what appears to be a misfire discharges after a short delay. This is usually down to a blockage in the flash hole or nipple. Click here for our useful blog on safety tips.

Jag - An accessory that fits into the end of the ramrod to aid in cleaning the barrel. Usually has serrated edges to grip a cleaning patch, or a loop to feed a cleaning patch through.

Loading Block - A wooden block that has been drilled with holes for carrying pre-patched balls. To use, the hole in the block is aligned with the muzzle, and with a short starter the ball is seated into the muzzle.

Minie ball  A hollow based lead bullet, designed to expand upon ignition to create a good gas seal in the bore. Named after its inventor, French army officer Claude-Etienne Minié.

Misfire - Situation that occurs when the round loaded in the chamber fails to fire, even when the cap or priming powder goes off.

Nipple - The small metal cone that the percussion cap is fitted to. Flame from the exploding cap is passed through the nipple to the main charge of powder loaded in the chamber.

Nipple Wrench - a tool used for replacing or removing a nipple from percussion guns.

Patch Box - An inlaid lidded box that is found on some Muzzle Loading rifles or shotguns, originally intended for carrying greased patches.

Patching - Cloth, usually cotton or linen, used to form a gas tight seal around the round ball loaded into a Muzzle Loading rifle.

Percussion- Simply put is the explanation of the ignition source of a muzzle loading gun. The percussive act of hitting ignites an impact sensitive explosive compound in the percussion cap, the flame from which then ignites the main charge.

Percussion Cap - A small metallic cup containing a minute charge of impact sensitive explosive. When placed on a nipple, the striking of the hammer causes the charge to explode, which in turn ignites the powder in the chamber.

Powder Flask - Carrying container for powder, commonly made of non-sparking metals, such as copper and brass. Occasionally made from stag horn or like materials.

There are a number of methods to measure or decant powder so click here a helpful guide.

Powder Measure - A graduated volumetric measuring device that can be adjusted to measure out different grain loads.

Pricker / Vent Prick - A piece of fine wire used to clear the nipple or flashhole of fouling or obstructions.

Ramrod - Usually made of wood, although brass and fiberglass are not uncommon. Used to seat the ball over the powder charge in Muzzle Loading rifles. Ramrods are commonly carried under the barrel, held by ramrod pipes.

Set Trigger - A double trigger mechanism in which the rear trigger is first pulled to set up the front trigger so that it can be released with very slight pressure.

Shot Pouch - A container, most often made of leather, used for carrying shot.

Short and Long Starter - A short, five- to six-inch rod with a round or flat palm-fitting handle. Used for starting patched balls down the muzzle of rifles.

Tang - Most often an extension from the breech plug that is the retainer that holds the breech portion of the barrel securely in place.

Vent  A small hole in the breech of a percussion gun. Commonly found on antique guns, this feature was designed to relieve excess pressure from the breech, but was later found to be redundant.

Worm - A corkscrew type of device used to remove a cleaning patch stuck in the bore of a Muzzle Loading rifle. It usually screws into the threaded tip of the ramrod.

Henry Krank is the exclusive importer of Pedersoli muzzleloaders into the UK. We have created a guide containing all you need to know about Pedersoli muzzleloaders over on our blog. For more information about our full range of Muzzle Loading guns, including flintlock and percussion rifles, details on what we have in stock, prices and availability can all be found on our website.

If you would like to purchase a muzzleloader from Henry Krank, we've produced a guide to purchasing guns that will walk you through the next steps you need to take.

Take a look at our Beginner's Guide to Muzzle Loading that covers how to load and clean your gun along with the equipment you will need including black powder.

If you have any questions relating to Muzzle Loading, please don't hesitate to get in touch with the team.

Henry Krank would like to acknowledge the University of New Mexico's 'Basics of Muzzleloading' by James E. Knight, reprinted in 1997.