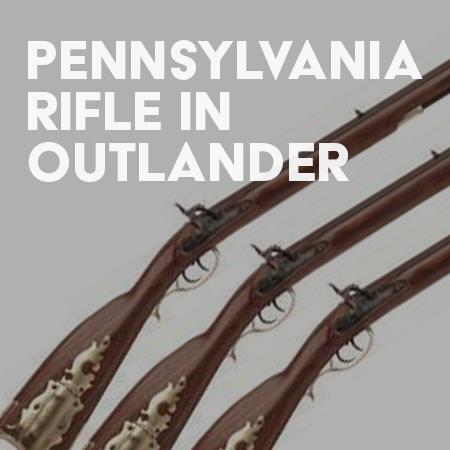 Outlander is a British-American TV series based on the novels by Diana Gabaldon. The eight historical multi-genre novels have been adapted for television and released to critical acclaim both here in the UK and in the United States. The first series sees the lead role, a character named Claire Beauchamp, transported back in time from the 1940s to the Highlands of Scotland in the mid-1700s.

As a historical drama, great care has gone into the recreation of 18th century life. Each series features plenty of periodically accurate guns and swords to keep any shooting enthusiast or keen collector happy.

Henry Krank are pleased to channel our own inner Outlander minus the kilts - and can reveal that we are stockists and exclusive importers of the Pedersoli rifle used in the recently released third series of Outlander.

What guns were used in the making of the Outlander TV series?

The main rifle used in the third series of Outlander is the Pedersoli Pennsylvania Rifle. This is a percussion reproduction of the Pennsylvanian Hunter rifle.

The rifle is available to purchase with a firearms licence in .32 and .45 calibre.

The Pedersoli Pennsylvania rifle is also ideal for a wall-hanger or presentation piece in your collection. Henry Krank are able to supply you a deactivated Pedersoli, including a deactivation certificate, for an additional £110. For sales of a deactivated rifle you must be over 18 but do not require a firearms certificate.

More guns with a starring role

If you're interested in knowing what guns were used in the making of other popular TV series and films, Henry Krank will be revealing all. Check out what gun was featured in the popular BBC remake of the infamous Gunpowder Plot, starring Kit Harrington from Game of Thrones.

Further information on how to buy a gun from Henry Krank

For more information on how to purchase the Pedersoli Pennsylvania Rifle or any firearm from Henry Krank  jump over to our blog on all you need to know about how to buy a gun. It explains whether you need a firearms certificate to make a purchase of different categories of guns.

If you have any questions about the Pennsylvania rifle or any other model, please do not hesitate to contact Henry Krank.