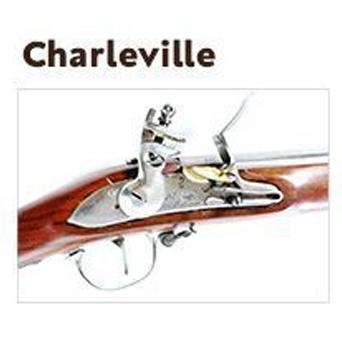 The Charleville 1777 is a gun every bit as historically significant as it's frequent opponent; the Brown Bess. First fielded in an earlier pattern in 1717, and used by French forces during the French Revolution, Napoleonic Wars, and others, the Charleville musket is one of the most recognisable firearms of the era. The best testament to the Charleville's design and effectiveness comes in how many times it was copied. The Charleville was copied by the Russians as the Tula 1808, Prussians with the 1809 Potsdam Musket, Dutch as their model 1815, and the fledgling Americans as their 1816 Springfield, and probably many others. Over seven million Charleville muzzle loading muskets were produced until 1820, and issued to French forces until the 1840s, and remains one of the most widely issued firearms of all time.

The Indian reproduction muzzle loading Charleville on test today is a faithful reproduction of the original French musket in every way. The stock is cut in the same manner of the Model 1777, with the wide butt plate and cheek cut out in the stock. At an overall length of 60 (152cm), and weighing in at 4.5kg, the Charleville is a fairly considerable musket to handle and fire. The Charleville is of smaller calibre than the Brown Bess, at .69 to the Bess .75, though this is still a considerable sized round and was used to devastating effectiveness in the battles of the era. Somewhat unique to the Charleville, the lock features a brass pan, and steel furniture, including barrel bands, trigger guard and a substantial butt plate. Just like the originals, the Indian reproduction black powder Charleville musket is fully stocked in wood, with bright steel furniture. The stock is cut in the same manner as the original, cut on the left hand side to facilitate aiming.

The Charleville is lighter than it's contemporary Brown Bess overall, though this weight is perhaps not the best distributed. The barrel is secured by three substantial bands, along with sling swivels, and the stock is shorter and lighter. This makes the Charleville somewhat muzzle heavy. Both the Brown Bess and Charleville are long guns, but the Brown Bess does handle marginally better. That said, the Charleville makes some attempt at sighting. The front barrel band features a narrow front post. This basic but useable front sight, coupled with the stock cheek cut out, actually makes the Charleville a very easy and comfortable musket to aim, far superior to the Bess rudimentary bayonet lug front sight. In terms of licensing, the Charleville, as a smoothbore long gun, can be held on a shotgun certificate, just like any other reproduction musket, so no variation is needed.

The traditional load for the Charleville is around 185 grains of black powder (not at all recommended, ever), which seems an astronomical number today. French ballisticians anticipated only around 20% of their powder to ignite, leading to a massive charge far in excess of what anyone would use today. I used a much more modest load on test; I didn't much fancy the effects of 185 grains of modern, efficient powder, either to my shoulder or to the gun. As always, the gun was loaded from my Pedersoli Horn Flask, and primed from a Pedersoli flintlock primer, loaded with Henry Krank fine powder. Though in the field, the Charleville would have been loaded with a paper cartridge, I have dispensed with this in favour of more conventional means, as they are awkward to make, and deliver an inconsistent result, which is fine for re-enactors, but not much use for actually testing a gun.

The gun is easy to load, a dry patch and .682 lead ball loads easily and seats on the powder consistently and was only lightly fouled after 10 shots. Accuracy was about what you'd expect from a smoothbore musket. Every shot struck the target, with around 3 in the black at 50 yards. This is pretty acceptable for a patched ball musket, fired off a rest. When fired standing, only 7/10 balls hit the 50 yard target, being spread out with no noticeable pattern across a standard musket target. Being front heavy, the gun might have a slight tendency to shoot low, however the easier sighting and target acquisition helps to mitigate this to a significant degree over the Brown Bess.

The length of the musket makes loading the gun slightly awkward, though no more awkward than any other contemporary musket or rifle. The large, brass pan is intelligently designed, and holds sufficient powder in a fairly deep recess, aiding with ignition and weather deflection. The lock works smoothly, and the trigger pull of the wide, flat trigger is pleasant, and less jerky than the Brown Bess. Recoil is reasonable, the gun is quite heavy, and the wide butt plate helps the gun to shoulder quite well.

All in all, the Charleville is a pleasant gun to shoot. By no means accurate, but satisfactory at short ranges, which was it's intended purpose. The Indian reproduction is well made, with parts well fitted and the stock well dimensioned and comfortable to use. It's a long gun, and to those unfamiliar with muskets, might be awkward to handle, but that is simply par for the course and is true of most muskets.

It shoots very well, and I would have to give it the edge over the Brown Bess, as some concessions have been given to the shooter's ease of use and comfort when designed, something which the Brown Bess cannot boast. To sum up very briefly, I would rather not take one into battle given the choice, but I'd quite happily buy one and take it down the range.

For a nice comparison, please read my other blog, reviewing and shooting the Indian Reproduction Brown Bess, click here.

For a detailed comparison between the Charleville & Brown Bess click here.

The Indian Reproduction Charleville musket is available to buy now, please telephone or email for availability and delivery options.