Musings on the Mannlicher – The Steyr Model 1886 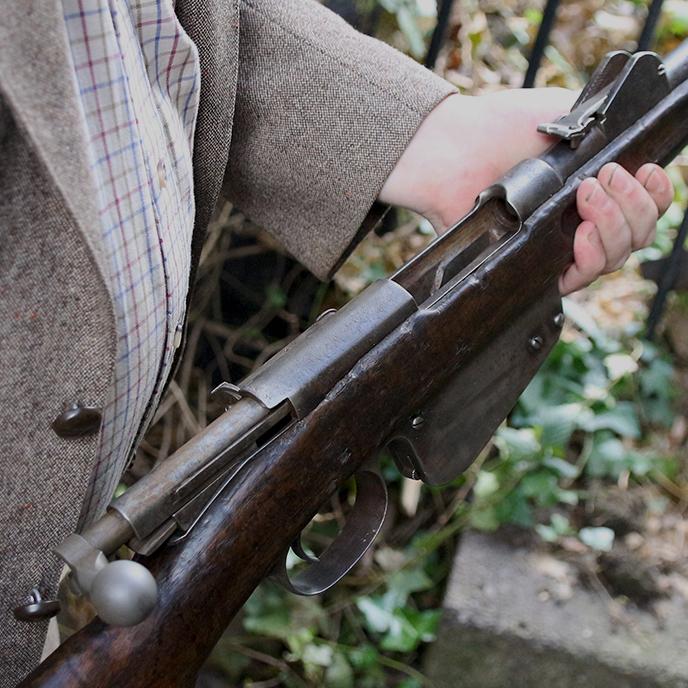 The Steyr Mannlicher Model 1886 was one of the last black powder service rifles issued, and therefore is one of the most developed and best. Developed by the formidable Austro-Hungarian Empire, the Model 1886 might have had a short service life, but was the foundation for generations of later Austrian small arms, some of which are still in use today.

You can view our collection of Steyr Mannlicher Model 1886 here.

Chambered for the obsolete 11x58mmR cartridge, the Steyr is a simple, straight pull bolt action rifle. The bolt is locked by way of a sliding wedge to the rear, has a simple sliding safety, and is loaded by an en bloc clip that simply drops out of the bottom of the rifle when the last round is loaded. It is a full length service rifle, with an overall length of 133cm, and a weight of 4.5kg. With elevating rear ladder sights and an ingenious long range volley sight on the right middle barrel band, the Steyr is a comprehensively designed and formidable service rifle.

It was designed to replace the ageing M1867 Wernl-Holub rifle (a similar enough action to the Snider Enfield), and was at its invention at the very forefront of small arms technology. As the age of smokeless powder dawned in the late 1880s, the Austro-Hungarian military were keen to adopt a smokeless cartridge, but didn’t alter the gun a great deal otherwise, proving the design. Were it made a decade earlier, it would have been one of the most superior black powder service rifles in use anywhere. The en bloc clip loading and bolt action is leagues ahead of other previous generation black powder rifles such as the Gras or Martini Henry, and it’s simplicity, ease of use and loading puts it ahead of more complicated black powder service rifles such as the Mauser Model 1871/84, only adopted two years prior.

The 1886 was in in service for less than two years, before being quickly replaced by the Model 1888, a functionally identical gun firing more modern 8mm cartridges, though it did continue in use with Austria-Hungary certainly until the First World War, and was documented in use by regular forces in the Spanish Civil War, with irregular use probably beyond. Many of these later model Steyr straight pull rifles have turned up in recent conflicts, and it is a testament to the original design that descendants of this rifle are still fit for use a century and a half after it’s invention. It is interesting to note that whilst service rifles of other European armies, such as the British Lee Enfield system or the German Mauser went through further decades of alteration and refinement, the Steyr Mannlicher system remained largely unchanged. The cynical would suggest this is due to the declining fortunes of the Austro Hungarian Empire, though it could simply be that the rifle did the job with no need of significant further changes.