How to Select the Right Lee Bullet Mould 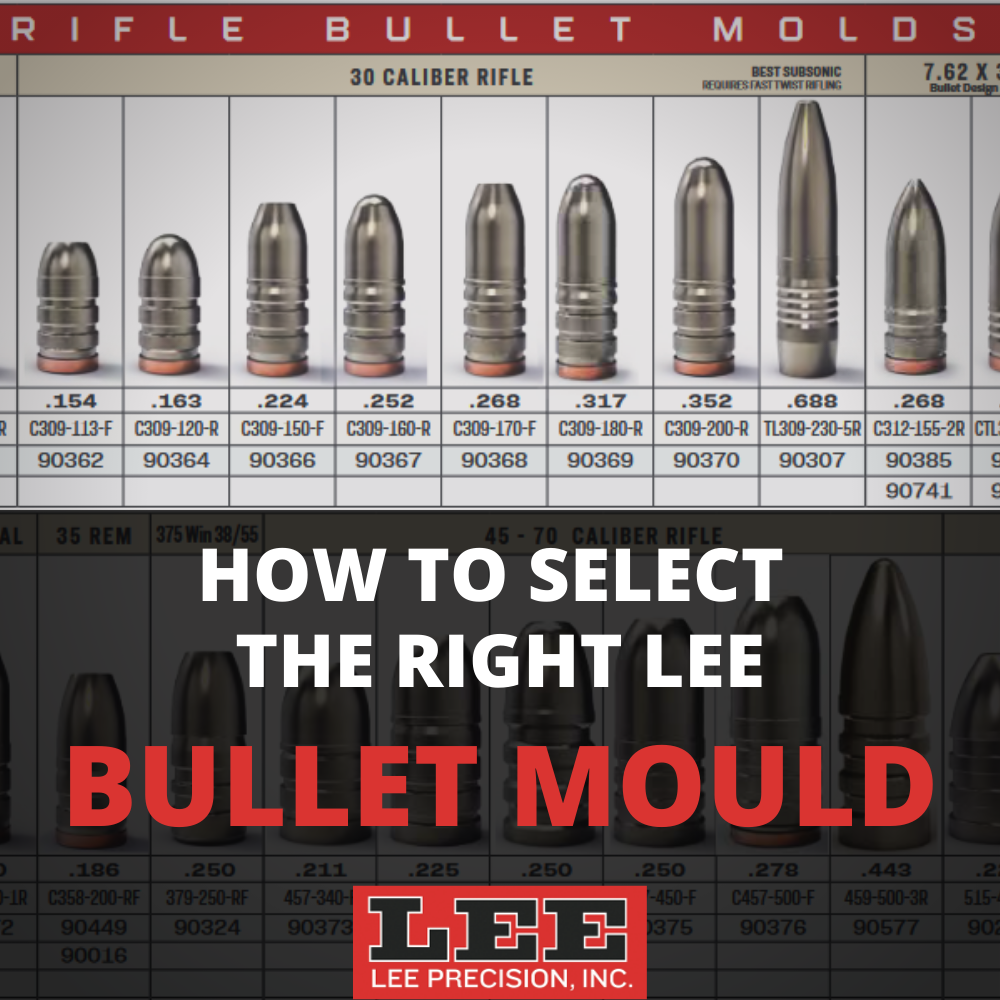 With so many moulds on offer, it helps to make sure you're picking the right one for your load. The range of moulds Lee has on offer can appear daunting at first, but with this handy guide you're certain to find the mould you're looking for. There's a few different pieces of information for each bullet, and each will help you choose the right bullet.

This chart is for moulds casting for rifle bullets, and is sufficient for most popular calibres such as .303, .308 and .223. Note that the name of the bullet is not necessarily indicative of the actual calibre of the bullet, for example .303 British actually uses a .312'' diameter bullet.

Click here for our full range of rifle bullet moulds from LEE. 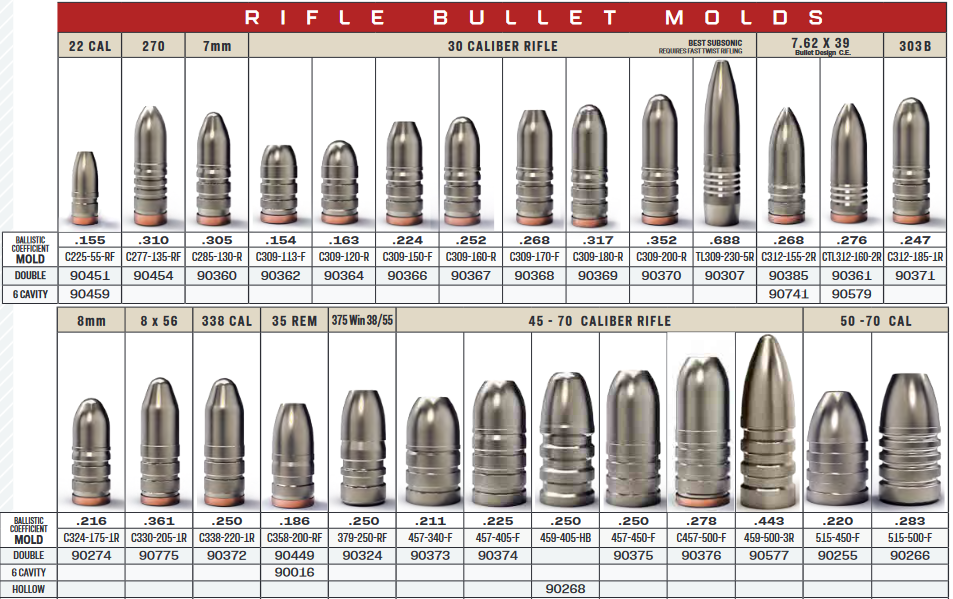 At the top of the chart is the rough calibre of each mould. Some are listed as the exact calibre they're to be loaded for, such as 7.62x39, some are more generic, such as .30, as these will fit numerous calibres. The exact diameter is also listed in the mould description, so you can double check you're getting the right one

Next is the image, which is pretty self explanatory. This is simply what the bullet will look like when cast, with crimping grooves, profile, etc. Note that some bullets will take a gas check.

This is simply how efficiently the bullet moves through the air, or, how easily the bullet can overcome air resistance. Most shooters will not concern themselves with this number unless it is for a specific application, such as hunting or long range shooting.

This designation (for example C225-55-RF) is Lee's designation of the mould, and contains most of the information needed to determine the type of bullet it will cast. Let's look at each part in turn

The C here denotes whether the bullet requires a gas check, simple as that.

A TL denotes that the bullet has micro bands cast into it, as opposed to traditional lubrication grooves. Micro banded bullets generally require no sizing.

The final one or two characters denote the bullet nose shape, in this case RF for round with a flat point. All are listed below

RF - Round with flat

This is simply whether the mould will cast two bullets at a time, or six, and the number corresponding for each. All Lee moulds are double cavity, but some are also available as a six cavity mould. Double cavity moulds come with handles included, separate handles are required for six cavity moulds. Click here to view the handles you will require for the 6 Cavity Moulds.

And that's all there is to it for the designation. Complicated at first, but easy once you know what you're looking for. With this information and the picture, you have a clear idea of what type of bullet each mould will cast.

The below chart is for pistol bullets. Note that the name of the bullet is not necessarily indicative of the actual calibre of the bullet. For example, bullets for a .38 Special actually use a .358'' diameter bullet. 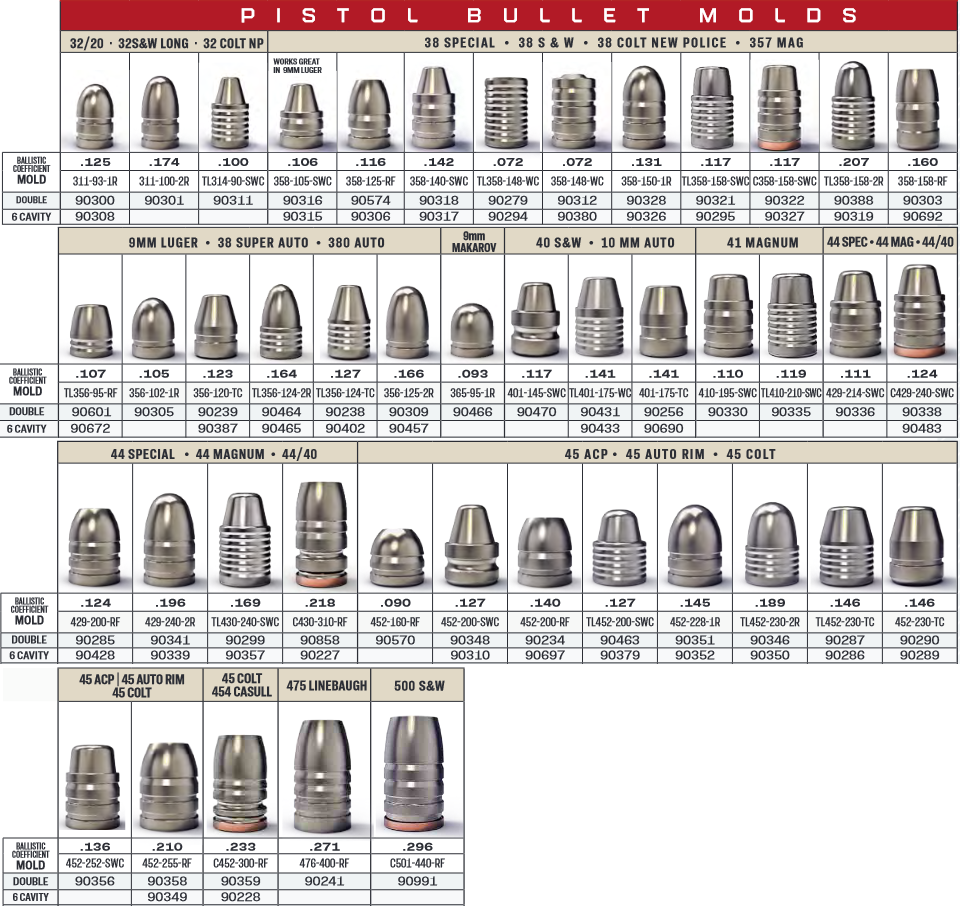