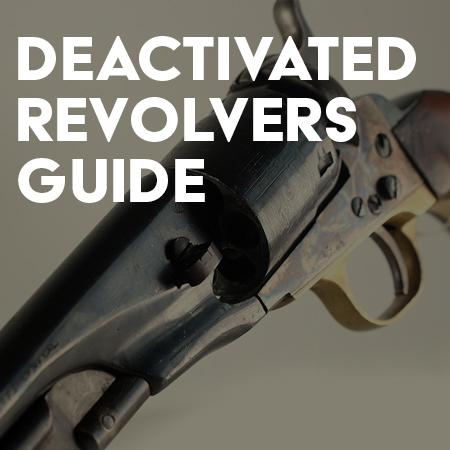 For the most up-to-date information on UK Deactivated Gun Laws, visit Deactivated Firearms - The UK Law.

The Gun Itself - How it Works

From outward appearance, the gun is unchanged from the original, live firing version. At a glance, you would not be able to tell one from the other. The big change comes to how the gun functions.

Firstly, the action has been tampered with to prevent the gun from cocking. The hammer can still be moved to its full cock position, but will not hold there and dry fire. The cylinder can still be operated as per normal, the action is not frozen solid, but will not cock or dry fire. In addition, the exterior screws through the frame for the bolt and trigger have been rendered immobile. This prevents the replacement of the interior components in order to make the gun dry fire as normal, though again this is not a significant or particularly noticeable change.

Looking at the cylinder, the only changes are internal, and therefore not visible. The inside of each chamber has been machined away and welded at it's base (nipple end), therefore preventing it from being used in it's intended way, though without impeding the movement of the action and cylinder. The face of the cylinder remains unchanged, though with close inspection down each chamber, the work is visible.

Moving to the barrel, again, outward appearance is unchanged. A slot has been milled in the underside of the barrel, underneath the loading lever, and therefore largely not visible without closer inspection.

On open frame Colt type revolvers, the wedge has been pinned in place through the barrel, so is immovable. This pin is visible when looking directly down the muzzle, but otherwise would go largely unnoticed.

On Remington pattern revolvers, the cylinder pin has likewise been fixed in the frame. There is also a cross pin through the forcing cone which is visible from the exterior, though not significant or particularly noticeable.

We have been really impressed with the new deactivated gun specification, the guns have been sensitively deactivated, and outward appearance is next to indecipherable from the original. These guns would make perfect display pieces in any collection, and is a real chance for any
enthusiast to own an impressive piece of gunmaking or western history.

How to buy a Deactivated Western Revolver

All of our deactivated western revolvers come complete with current deactivation certificate. You must be over 18 to purchase, and these guns can be mailed direct to you on a next day service. Order online, or over the telephone.

If there is a particular model you desire, we can deactivate any revolver listed on our website, to new specification, for an additional fee of £120. This process takes approximately 12-16 weeks.