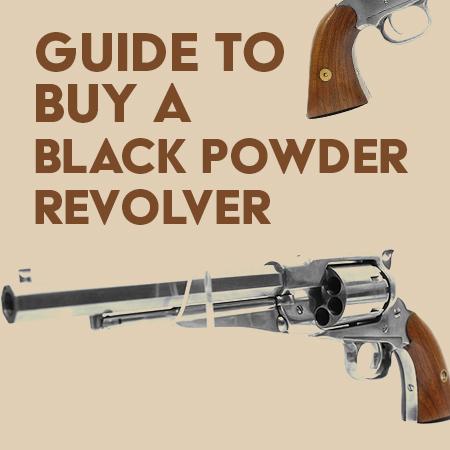 What Kind Of Black Powder Revolvers Are Available in the UK?

The first question most often asked is Pietta or Uberti? Uberti are makers of black powder revolvers of long standing, and their reputation is well earnt. The fit and finish is invariably good, and the revolvers hold up to prolonged use, even after decades. I have heard say that Pietta are somewhat behind Uberti in terms of quality, but in my experience, this is no longer true. The fit and finish on Pietta guns is now just as good as Uberti's.

The main difference between the two manufacturers, if it can be called a difference, is that Pietta tend to produce the more unusual guns of the period, such as their Remington Buffalo, deluxe engraved models, and Le Mat's patent revolver. Uberti focus more on the historically correct guns, and their copies of the 1860 etc, are utterly faithful to the original model.

Should I Get A 44 Calibre Or A 36 Calibre Black Powder Revolver?

Many believe .36 is better, as there is a misconstrued belief that the lighter ball will make it fly farther and more accurately, but .44 balls are easier to load, due to their larger diameter, and grip the rifling of the barrel better. Therefore, the main difference between a .44 and a .36 is the size of the gun.

There are some cross overs, for example, the 1851 and 1860 are broadly the same size. 'Full size' guns, like the Remington 1858, are a pleasure to shoot in the larger calibre, however the smaller models, like the Colt 1862, also shoot excellently, and their robustness belies their delicate appearance.

The recoil is also similar between the two guns, as .44 models are generally heavier, they absorb the slightly greater recoil better. It is therefore hard for the shooter to tell the difference in felt recoil between .44 and .36, even with full power loads. With careful care and maintenance, either calibre is equally sturdy and satisfying to shoot.

What Variation Should I Apply For To Be Able to Buy A Black Powder Revolver?

When applying for a variation, it is important to specify both the calibre, and that it is a revolver. So, for a variation to buy a .44 Remington 1858, the variation application would read 'muzzle loading pistol, calibre 44'. This would then enable you to buy any .44 revolver (likewise with .36), useful if you know you want a black powder revolver, but not necessarily exactly which model.

Which Black Powder Revolver Should I Buy, A Colt Or Remington?

Colts are open framed revolvers, meaning the gun disassembles into 3 parts; the barrel, the frame, and the cylinder. With Remington model revolvers, the barrel and frame remain attached, and only the cylinder can be removed. Colts are therefore less robust, as delicate tolerances between the 3 parts are required for the gun to perform well.

That said, our Italian reproduction Colt revolvers are excellently built, and the tolerances out of the box cannot be faulted. The sights on the Colt revolvers are also less precise, as the rear sight is on the top of the hammer when fully cocked, therefore is in a minutely different position each time the gun is fired, whereas the Remington is fixed.

Both can be a challenge to use, though the comparative impreciseness of the Colt is made up by the sight being easier to see, with the colour contrast between the foresight brass and the hammer's steel. The Remington's fixed frame design means the gun is sturdier when fired, as the entire frame and barrel move as one piece. This does have the disadvantage of, should any tolerances develop, they are harder to remedy on a firearm with less individual parts.

Which Finish Is The Best For Black Powder Revolvers?

As our Italian reproductions are faithful copies of the original, they share the same material tolerances. The frame material is important to consider, especially if using pyrodex or similar. Brass is more malleable than steel, brass frames have been known to stretch over time, which can lead to inaccuracy after many hundreds of shots fired.

The differences in stainless and blued finishes are largely just cosmetic, however stainless steel is still softer than the standard case-hardened steel, and this may be a consideration if the gun is to have much heavy use. Bear in mind, these guns are designed with black powder in mind, and the shooter may encounter problems when using pyrodex etc. in any gun.

I Am Shooting A Competition, Which Black Powder Revolver Is Best For Me?

Many shooting clubs hold black powder revolver competitions, and it therefore makes sense that having a gun made for the purpose will enable the shooter to compete better than a standard model.

If in-club competitions are the only aim of buying a black powder revolver, it would make sense to buy a gun such as Pietta's 1858 New Model Army Target (168-44), with adjustable, easy to read sights, there is little comparison between these modern amenities and the original fixed sights. Likewise, if you were interested in shooting 'spirit of the original' competitions, it would make sense to have a gun as close to the original as possible, for which the Pietta 1858 competition model (166a-44) would be ideal.

It is also important to consider barrel length. Both the Remington 1858 and Colt 1860 come with an 8'' barrel as standard, and arguably, a full-length barrel is ideal to get the best accuracy out of the gun. These 'target' models are also excellent for general recreational shooting, as it's unarguably more fun to hit the target more often than you miss it.

What Price Can I Expect to Pay For a Black Powder Revolver?

The most deciding factor, for most shooters, is the price.

Excellent examples can be bought second hand, as long as the buyer is circumspect and will take time to examine the gun properly. New guns, however, are not priced that much more than second hand guns, and many shooters may prefer to have a new gun that they know the history of.

With new Colt models starting at around £240, and Remingtons at £260, getting into black powder revolver shooting is not ruinously expensive. No matter what the price, the guns are equally as fun to shoot, though it is worth the extra money if you have a particular model in mind.

Ease of Loading and General Maintenance of Black Powder Revolvers

As most Colt and Remington revolvers, are loaded in the same way, loading is very similar. The only exception being the Colt 1873, or Single Action Army, as it was retroactively designed from a cartridge revolver, and must therefore be loaded on a loading stand.

Most Colts and Remingtons use a single point pivoting loading lever, which is generally fine to use, however can be tough if loading a particularly tight ball. The Colt 1860 is by far the best, as it's loading lever 'creeps', and the leverage is distributed on several points. This is however, a relatively minor consideration, and any proper fitting ball can be loaded quite comfortably by hand with any of the tools available. It is more likely to indicate a problem elsewhere if this is not possible.

Black powder revolvers, on the whole, are largely reliable. The actions are simple and easily repaired if parts break. The main problem they suffer from is fouling.

As with any black powder shooting, it is imperative to clean the chambers and barrel to prevent pitting and rust, however the action itself is often overlooked. The Remington fares better than the Colt in this regard, as Colt revolvers are open at the rear, and it is a common problem for spent shards of percussion cap and black powder debris to fall down into the action and eventually jam.

As the Remington is more enclosed, this is less of a problem, though black powder fouling will still accumulate on the moving internal parts and cause wear and blockages if not maintained. When shooting black powder, proper cleaning and maintenance is par to the course, and reproduction black powder revolvers are no different, and no more onerous, in this regard.

One of the major draws of any black powder shooting is the connection to history.

Some shooters may prefer to be entirely historically accurate with their shooting, or may be re-enacting, and may require the kind of gun that would likely have been carried in, for example, the American Civil War.

Both Uberti and Pietta do reproductions of guns with subtle differences produced on either side of this conflict, like the Pietta Dance revolver, based on a Confederate 1851 clone, or a Uberti 1849 'Wells Fargo', modelled on Colt's first foray into the civilian market.

Historical accuracy is as important to manufacturers as it is to shooters, and we are fortunate that so many different models are produced to best represent the period.

- How to get a Black Powder Certificate