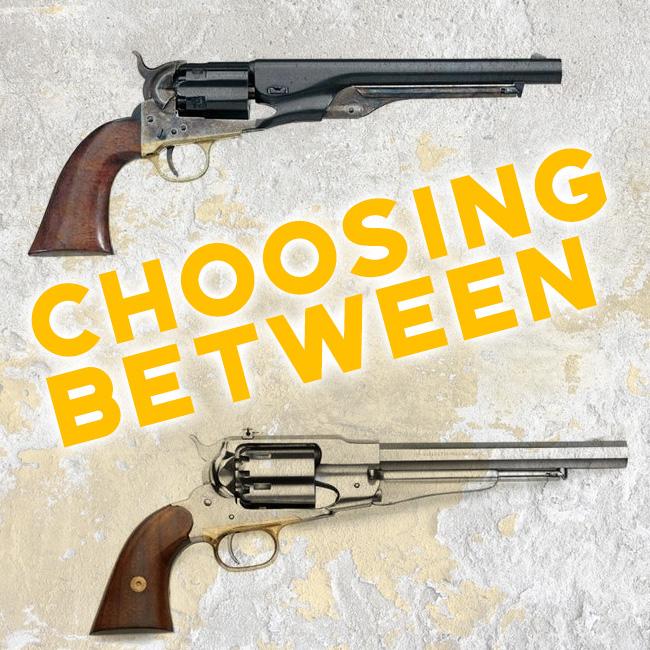 Choosing your first .44 black powder revolver can be confusing, and everyone has their own favourite when it comes to choosing between these two combatants. Is one really better than the other? Numbers say a lot and between 1860 1873 Colt produced a little over 200,500 of these revolvers the vast majority being produced during the American Civil War. Colt retailed these at an average of $25 (just less than £20).

Between 1863 - 1875 Remington produced a little over 122,000 models were produced retailing at an average of $12 (less than £10). So, originally the winner on cost would have been Remington but sales were vastly eclipsed by the Colts. We have to remember that during these years Colt had built up well over a decade of sales, marketing and brand awareness, were has Remington could be classed as the newcomer on the block. However, in reality the revolvers in question were very alike in certain features. Both were .44 calibre 6 shot blued revolvers with 8 inch barrels. Both shot the same sized ball (in fact they were actually produced with .454 bores making them really .45).

The major difference and the one easily identified by the casual observer is the frame, the Colt is an open - top design with nothing projecting above the cylinder. The Remington has a solid frame and looks much more reminiscent of a modern revolver in this aspect with the barrel being screwed tightly into the cylinder, giving it a much more solid appearance.

Sights differ in the respect that with no top frame the Colt employs a notch in the hammer for lining up with front sight, where the Remington uses a groove milled into the top receiver to use as a sighting channel with the front sight. Two different approaches but both perfectly workable.

Even though the Remington design is stronger the tighter tolerances mean that it can suffer from fouling quicker and to a larger degree than the colt.

How does this translate to the shooter wishing to purchase one of these guns?

Both types are available as modern reproductions from Uberti and Pietta in a variety of barrel lengths, steel, stainless and brass frames and some even have adjustable sights meaning there is a style and look for everyone.

There is no right or wrong and both are more than capable of performing on the range, beauty and function are in the eye of the beholder so once you decide the one for you visit the range, load, shoot and enjoy traveling back in time.

How To Get The Most From Your Black Powder Revolver

Replacement Of Internal Parts For The Colt Black Powder Revolvers