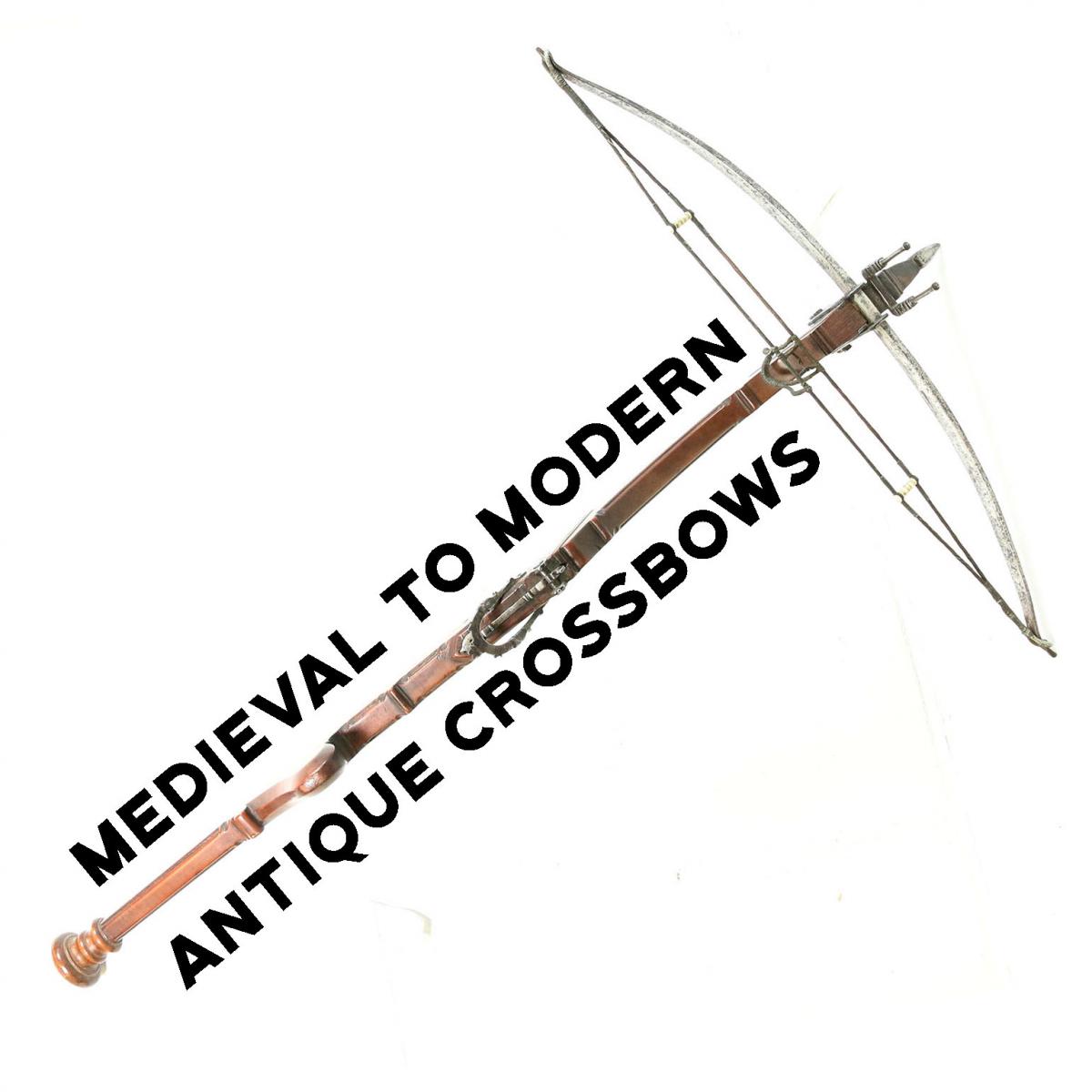 It is a common misconception that technological advances instantly rendered their predecessors obsolete. It can therefore be surprising to learn that crossbows were viable and popular tools well into the 19th century. The crossbow did not instantly give way to the gun, just like the crossbow never wholly superseded the longbow. The crossbow is also older than you might think, and was invented most likely in China in the mid 600s BC, for context, this is nearly 650 years before the Roman invasion of Britain. This technology did not gain widespread use in Europe until the medieval period, around the time of the Norman Conquest, but was common on battlefields probably up to around the English Civil War. 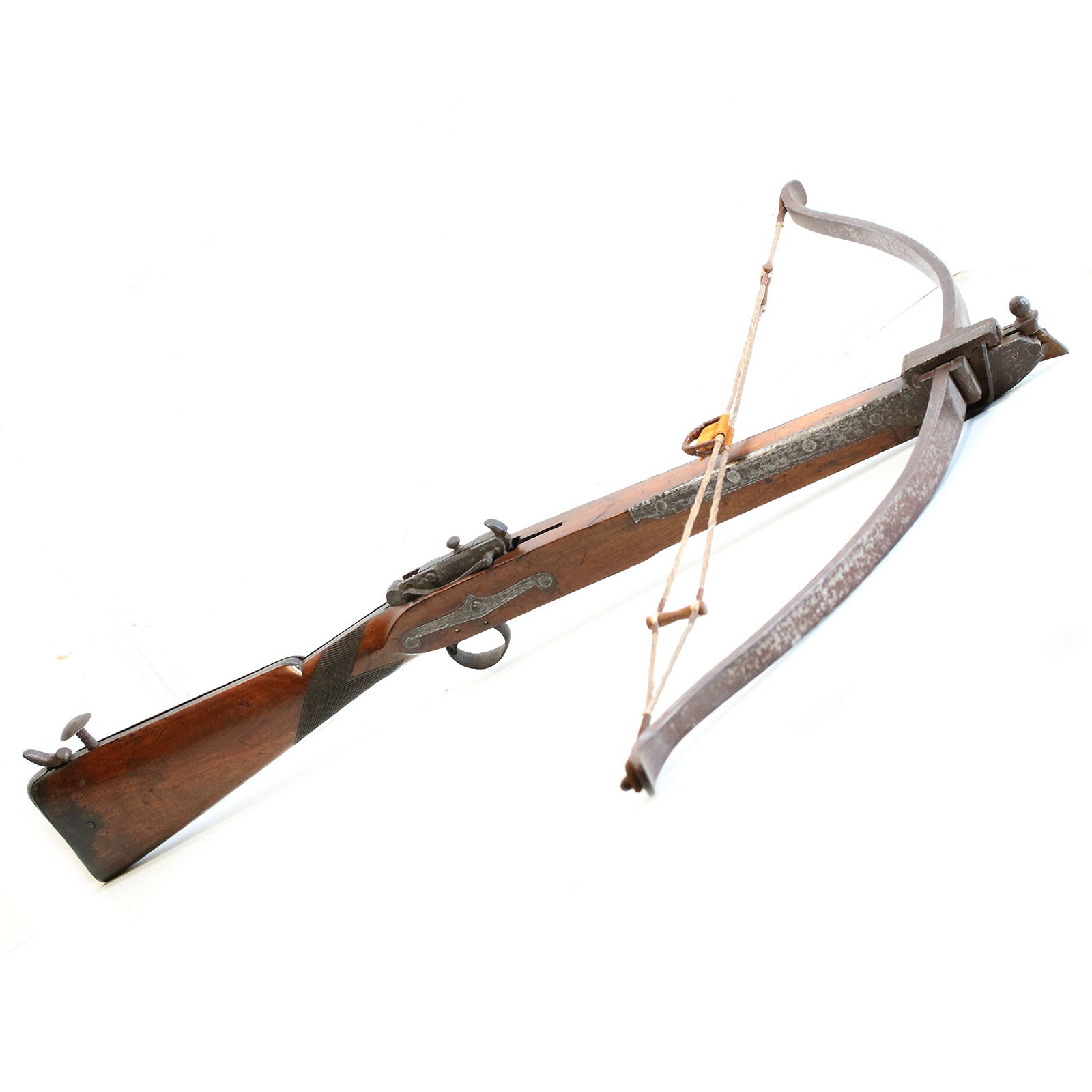 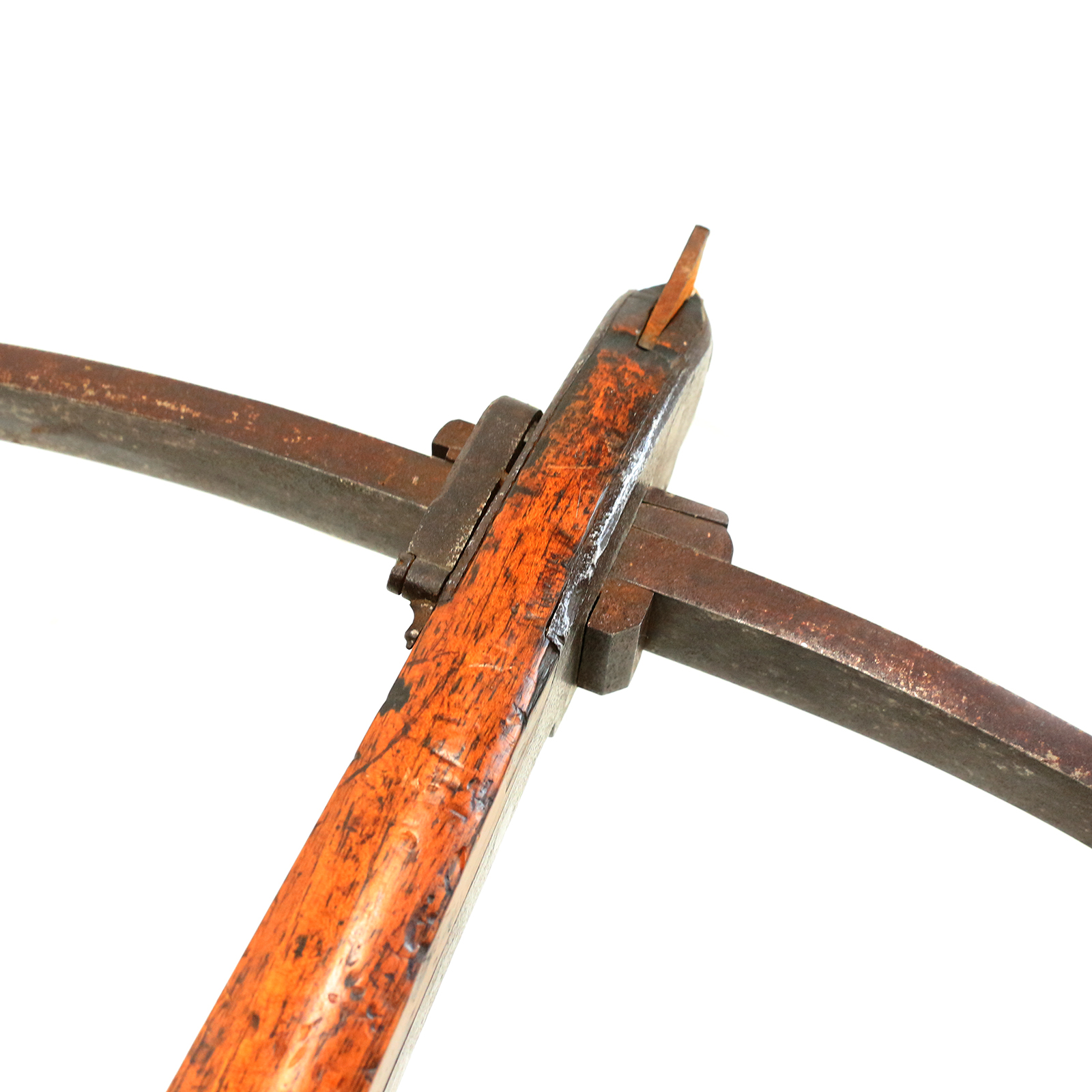 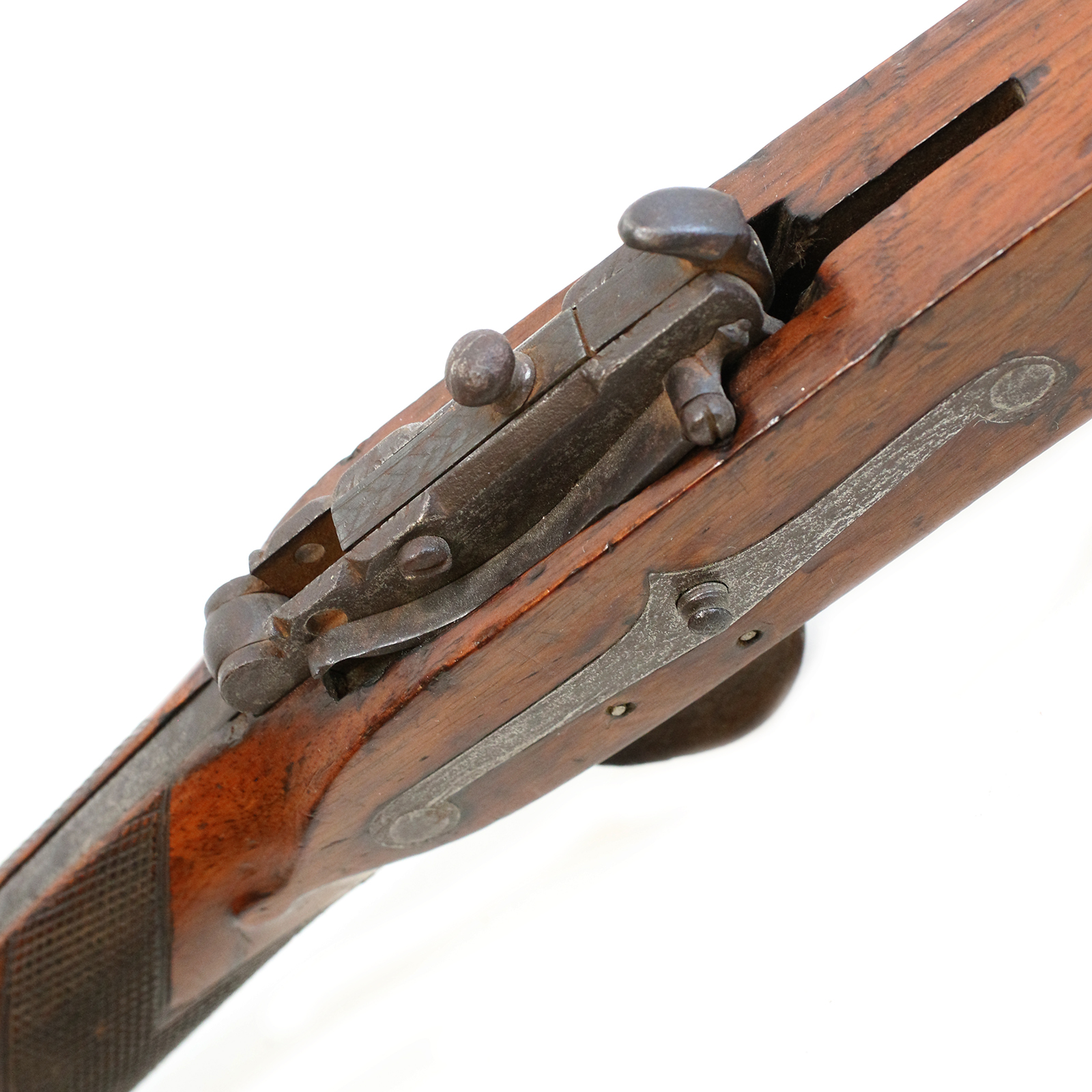 Early sporting crossbows were largely similar to military weapons of the era, utilizing a cranquein, the external pulley tool used for drawing the crossbow's string. Often decorated with inlay or fabric, steel or leather embellishments, they were otherwise the same tools as might have been used at Agincourt. As time progressed, the difference between military and sporting crossbows increased. In the latter days of the crossbow's mainstream vogue, the style in Northern Europe trended towards more figured styles with bone inlay, similar to wheellock sporting rifles of the era.

The main problem faced by crossbow users throughout history has been how to draw the string, as crossbows generally use substantially shorter limbs for their draw than bows, meaning greater force has to be exerted in order to cock the piece, often beyond hand strength. Innumerable winches, pulleys and external gadgets have been invented to draw the string to full power. Earlier examples may have been pulled by hand, with medieval weapons commonly utilising an external iron lever or cranking mechanism. Later examples may use a built in extending lever encompassing the trigger mechanism, requiring just one movement from the user to arm the weapon. Modern crossbows utilise a compound system, reducing effort on the part of the user even further.

Crossbows continued in popularity amongst civilian and sporting shooters for some centuries afterwards, and many gunmakers of the late 18th century ere also crossbow makers and cutlers, with crossbows frequently appearing in their advertising literature and trade labels. Many later crossbows exhibit the same craftsmanship and decorative styles as their powder burning confederates, far removed from their antique and medieval predecessors. 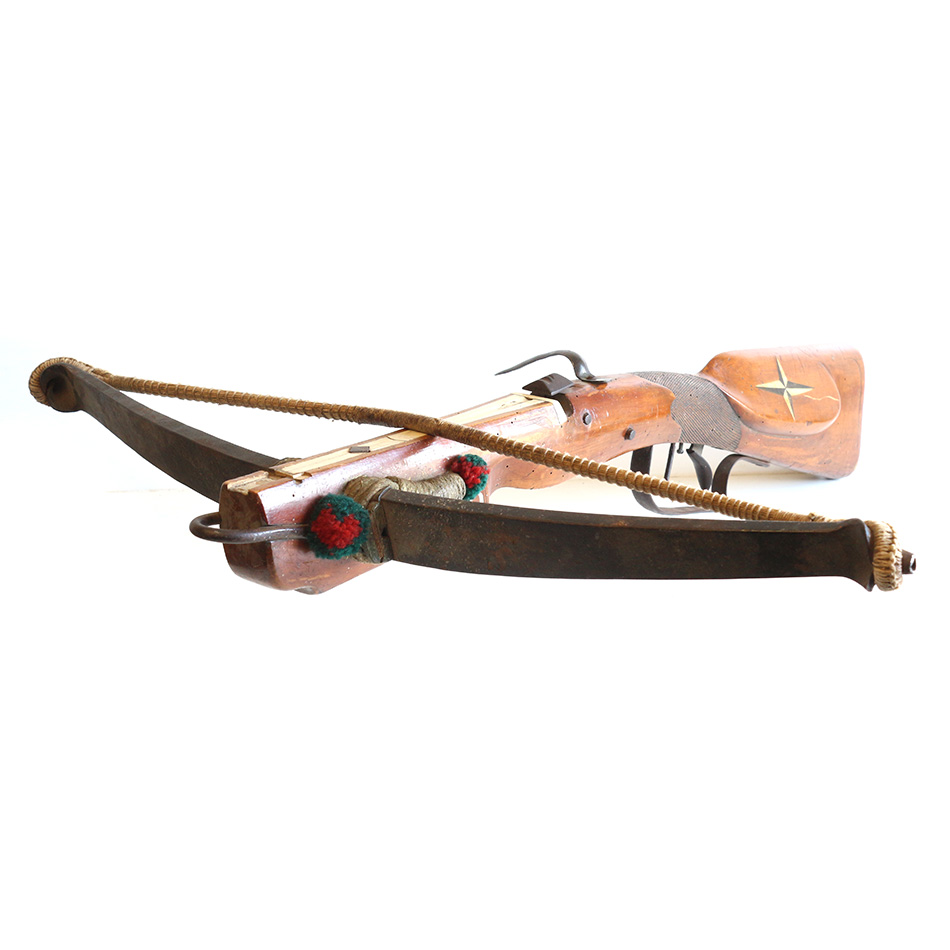 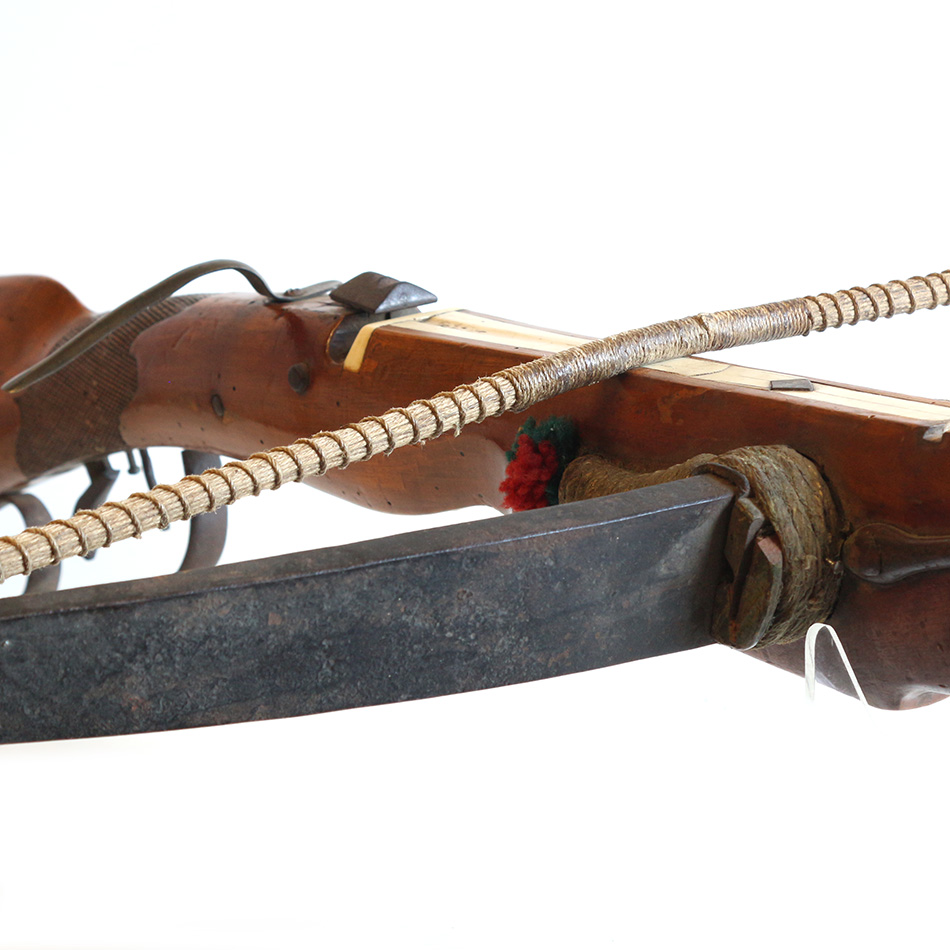 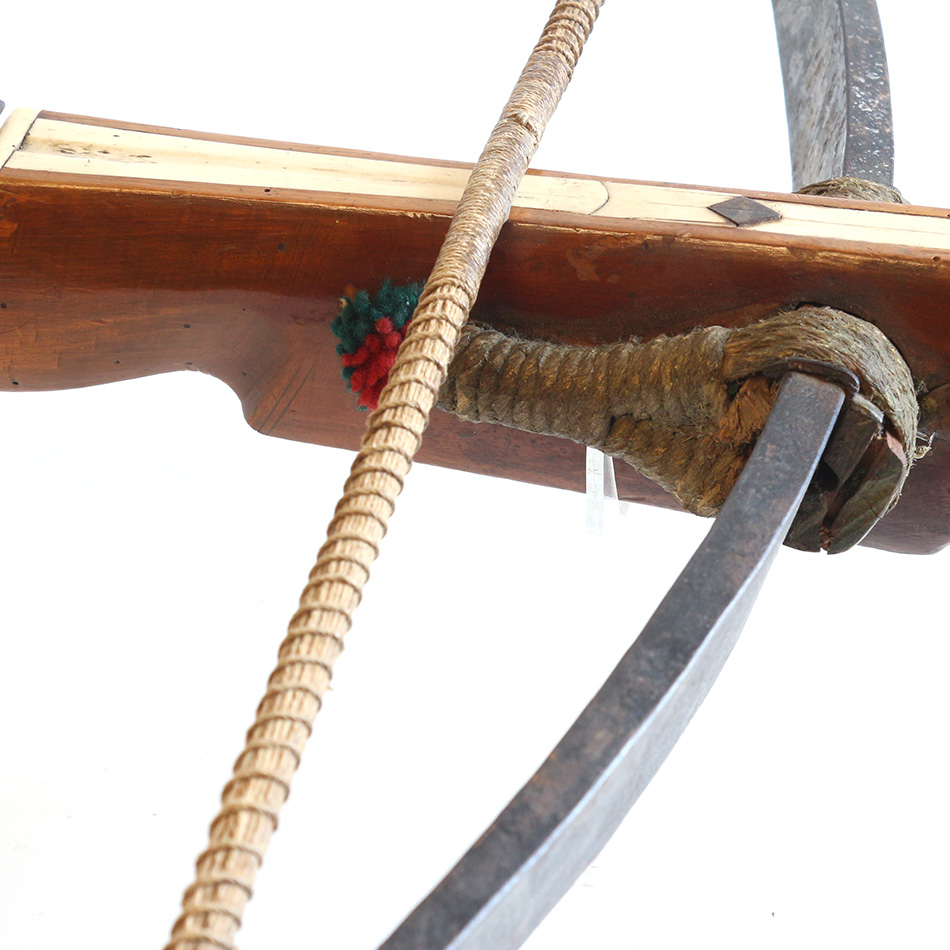 The crossbow, or it's bullet firing cousin, the stonebow, was popular for target shooting and small game. With power roughly similar to an air rifle, the crossbow provided a niche for lower powered shooting for when a gun was impractical or undesirable. Militaries would invariably use the most powerful man portable crossbow they could find for the best price, but for civilian shooters, this was less of an issue, and ornate and well figured styles are not uncommon. The crossbow is an accurate tool, requiring much less practise and training than a longbow, and it is easy to see why it has retained it's popularity amongst sporting shooters into the present day.

If you don't have an antique crossbow in your collection, they're an excellent and unusual thing to consider adding.

For more images, information or to order, see our website at www.henrykrank.com, email us at sales@henrykrank.com or telephone 0113 256 9163. All our antiques are shipped on a 24 hour service.

We understand buying online or over the telephone isn't quite the same as having the item in your hands, therefore, as with all our antiques, we offer a no quibble returns policy if for whatever reason you're unhappy with your purchase. Simply return the item for a full refund.

We are also always on the look-out for quality antiques, so if you have anything you wish to sell, from a single item to a large collection, please don't hesitate to get in touch.